The term stereolithography was coined in 1986 by Charles (Chuck) W. Hull, who patented it as a method and apparatus for making solid objects by successively printing thin layers of the ultraviolet curable material one on top of the other. Hull's patent described a concentrated beam of ultraviolet light focused onto the surface of a vat filled with liquid photopolymer. The light beam draws the object onto the surface of the liquid layer by layer, and using polymerization or cross-linking to create a solid, a complex process which requires automation. In 1986, Hull founded the first company to generalize and commercialize this procedure, 3D Systems Inc, which is currently based in Rock Hill, SC. More recently, attempts have been made to construct mathematical models of the stereolithography process and design algorithms to determine whether a proposed object may be constructed by the process.

Stereolithography is an additive manufacturing process which employs a vat of liquid ultraviolet curable photopolymer resin and an ultraviolet laser to build parts' layers one at a time. For each layer, the laser beam traces a cross-section of the part pattern on the surface of the liquid resin. Exposure to the ultraviolet laser light cures and solidifies the pattern traced on the resin and joins it to the layer below.

After the pattern has been traced, the SLA's elevator platform descends by a distance equal to the thickness of a single layer, typically 0.05 mm to 0.15 mm (0.002"" to 0.006""). Then, a resin-filled blade sweeps across the cross section of the part, re-coating it with fresh material. On this new liquid surface, the subsequent layer pattern is traced, joining the previous layer. A complete 3-D part is formed by this process. After being built, parts are immersed in a chemical bath in order to be cleaned of excess resin and are subsequently cured in an ultraviolet oven.

Stereolithography requires the use of supporting structures which serve to attach the part to the elevator platform, prevent deflection due to gravity and hold the cross sections in place so that they resist lateral pressure from the re-coater blade. Supports are generated automatically during the preparation of 3D Computer Aided Design models for use on the stereolithography machine, although they may be manipulated manually. Supports must be removed from the finished product manually, unlike in other, less costly, rapid prototyping technologies. 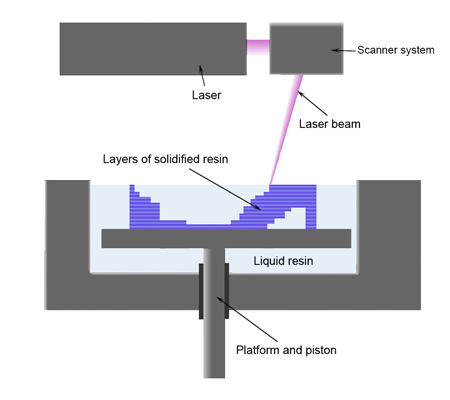